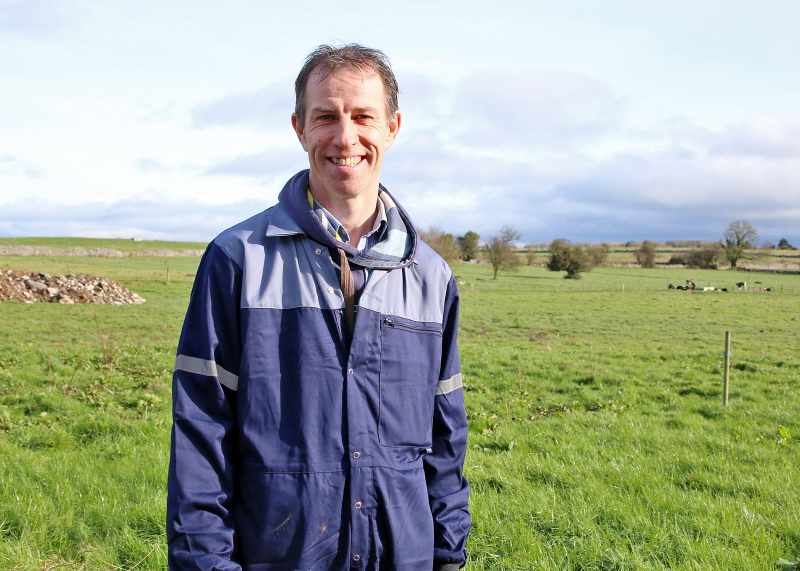 History of the Farm

We recently visited the dairy farm of Gerard Murnane near Bruff in County Limerick to talk to him about how Milk Recording and Herd Health services have been used to improve his breeding programme and his herd’s health status. Gerard’s father Pat Murnane bought their home farm in 1968 and forty years on, in 2008, Gerard took over the operation. The herd today is predominantly Friesian, with a small percentage of Montbéliarde cross that was bred into the herd about fifteen years ago. Gerard’s family has been using Munster Bovine for over thirty years now, and all of their replacements are AI bred. The farms conception rate varies slightly from year to year but averages between 60 and 70% first service for cows and this year his conception rate for maiden heifers was 88 %.

Gerard uses tail paint on his cows and scratch cards on the heifers. He also has a vasectomized bull that is run with the maiden heifers at the start of the breeding season and later with the cow as activity is decreasing. He generally tries to keep a paddock of grass near the yard for the maiden heifers at the start of breeding. The maiden heifers are heat detected and bred for the first 7 -10 days. They receive an injection of prostaglandin towards the end of this period and the remainder are submitted 2- 3 days after this injection. The stock bull is then run with the heifers.

Gerard has been Milk Recording for twenty years. He conducts manual Milk Recording and a Munster Bovine Milk Recorder assists him at each recording. As a process, he thinks that since the system has been changed to single sampling this year it is a lot more straightforward. Gerard has a very busy life. With small kids and underage training commitments it suits him perfectly to spend an extra half hour at the recording in the morning and this way his evening routine isn’t disrupted too much. 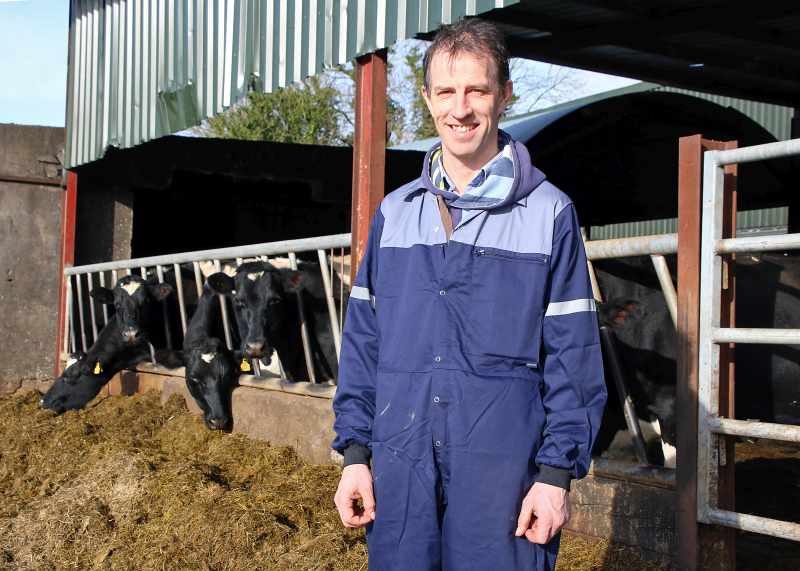 Guidance and insights for his breeding decisions is the most valuable aspect of Milk Recording for Gerard. The Milk Recording reports are the first port of call for Gerard when he is starting his breeding plan each year. Kg’s of milk solids is the first thing that he looks at, but he also considers the actual yield and factors in calving dates as well. Critically, he wants to breed off cows that have a history of calving in February. From there, he selects the top 50-60% for Friesian AI, if there’s a repeat amongst them he gives them Friesian AI and the remainder of the herd are bred to beef AI.

This year is Gerard’s third year in a row carrying out selective dry cow therapy. Gerard’s main motivation for doing so is the cost and convenience. “It really shortens down the job if you don’t have to be giving antibiotics but obviously the hygiene has to be high and the whole process carried out to a very high standard. I suppose because of the dry farm that I have, every cow that’s dried off is out for another 2-3 weeks after being dried off. This offers peace of mind, as the cows get a great chance to dry up before coming into the cubicles.”

His lowest cell count cows which are consistently low across the reports and had no case of clinical mastitis are automatically selectively dried off. Around 30/80 this year were sealed only. “Obviously, you couldn’t do Selective Dry Cow Therapy without Milk Recording.”

Without Milk Recording Gerard believes that it is impossible to know which cows are your best or your worst performers. “If you’re not recording, a cow that has a very good supply of milk might seem like a good performer, but you don’t know the content of what she’s producing. It could be protein of 3% or protein of 3.5%; unless you test the milk, you won’t know.” Gerard has certainly noticed an increase in his milk solids because of the decisions he makes from Milk Recording. Over the past 3-5 years he estimates his milk solids have increase by 15%. He attributes a lot of that increase to Milk Recording. “I’m not breeding off the cows that are producing poorer quality milk.”

Targets for the coming years

Gerard’s main focus is to get the kg’s of milk solids higher. Currently, he is trying to ensure that the replacements coming on in the next couple of years are better than the best of what he has now. He plans on culling the poorest performing cows based on information available through the milk recording reports. 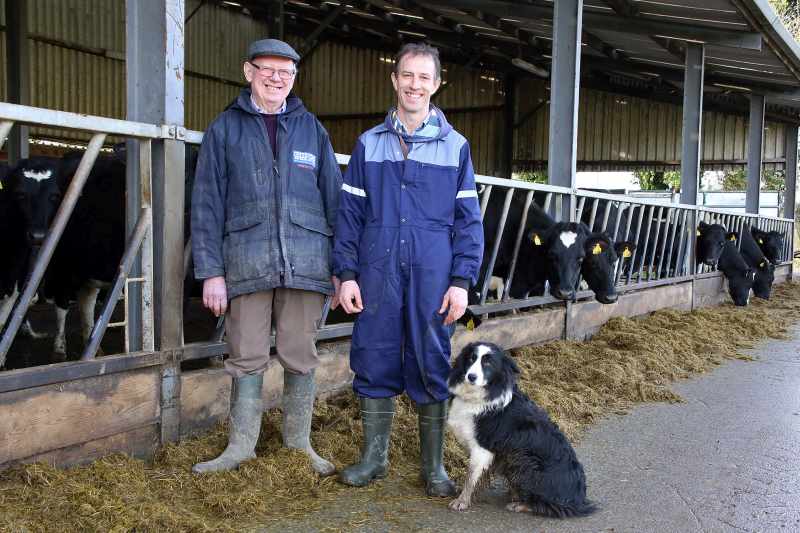 Gerard is currently on the Munster Bovine gold Herd Health programme. He sits down once a year for an in-depth discussion with a Munster Bovine vet. Though the programme, Gerard found out that his herd had a high reading for IBR. IBR is a Herpes virus that can causes respiratory disease and production losses in cattle. When the virus is endemic in a herd, it is very common not to see any obvious clinical signs and it is the production of the herd that is affected. A vaccination programme is now in place and the progress the herd is making is being continuously monitored using the bulk milk screening which tests for IBR wild antibodies only.

Gerard found the one to one vet meeting extremely beneficial. The advice he received helped him to get to grips with parasite control, which he was originally struggling with. “It used to be a bit hit and miss but since I joined Herd Health I get a programme for each different category of animal, what you give the cows after drying them off, what you give them during the dry period, how to treat the incalf heifers and weanlings.”Gerard acknowledges the importance of the Herd Health and Milk Recording services for his farm. “You’re only shooting in the dark without them. There are so many diseases now, and the cost of them if there’s an outbreak is huge.” He believes that Herd Health and Milk Recording are like insurance policies which protects farmers.

How to get started: