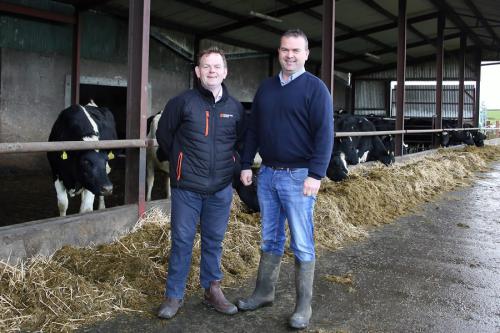 In the latest edition of Munster Bovine’s Farm Life Story series, we visited the farm of customer Edmund Tobin, a dairy farmer based in Cashel, Co. Tipperary. Edmund took over the reins at his family farm over twenty years ago from his father Michael who had managed this farm for forty years. Edmund is currently milking 175 cows in addition to managing fifty 0-1 years olds and forty 1- 2-year olds. On top of this, Edmund sells a number of replacements every year. He has 24 units and a cluster flush system in place in his parlour.

Edmund changed his breeding programme this year in conjunction with Kevin his son. In the past, all cows bred in the first three weeks received a dairy straw, but he has since decided to be more selective. Currently, he is breeding off the better cows which he identifies as the higher indexed cows and the cows in the green on his end of year milk recording report provided by Munster Bovine.

Benefiting from the Herd Health Programme

Edmund is a Munster Bovine Gold Programme Herd Health customer. He finds this to be hugely beneficial and believes that the information the programme gives him is vital in the running of his farm. The programme keeps him well informed about what’s happening from a herd health status on his busy farm. This allows him to act and resolve any disease issues that arises quickly and effectively. Through the Herd Health programme fluke was identified in 2018. The same problem was also identified on farm in the Winter of 2017.

A liver fluke burden in dairy cows will impact production and fertility performance. Liver fluke also has the effect of lowering the cow’s immune system to other diseases, such as salmonella. The treatment options for liver fluke are limited because only certain products are licensed in dairy cows and these products have different milk withdrawals which means they can only be used during the dry period. Making the right decisions around product choice, timing of treatment and avoiding underdosing are crucial to achieving a successful outcome.

After this issue was detected in the herd, Edmund had a one to one discussion with a Munster vet. Following this, he was given a dosing programme, and in conjunction with his own vet he followed a dosing plan and resolved the issue. It was very reassuring to see that the levels of liver fluke dropped right down to a negative result for the April reading from a high result the previous November. This gave Edmund great confidence that the dosing programme that was implemented was effective. 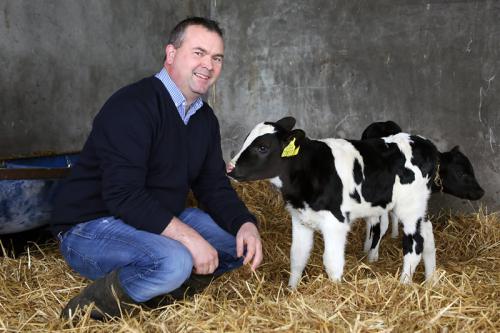 Edmund carried out six D.I.Y milk recordings last year. When a milk recording is scheduled, Kevin drafts in the help of both his sons Kevin and Niall to complete the recording. Although the process isn’t his favourite task on the farm, Edmund believes the results are certainly worthwhile. Up to now the major benefit of being a Milk Recording customer for Edmund has been SCC control. He believes this is going to be more and more important in the future.

Milk Recording for a Breeding Programme

Milk Recording will be paramount for Edmund’s breeding programme going forward. The Tipperary native has been putting more of a focus on it now than he has done in the past. After conducting an exercise last November with Joe Tobin, his cousin and Breeding Advisor from Munster Bovine, Edmund was disappointed with the number of heifers on farm. Joe completed an ancestry check on the cows, identifying what bulls they were off, and which dams they came from. This convinced him that breeding off better cows was a must. Edmund is hoping that in the next few years he gets the best stock out of the best cows as a result of better breeding decisions. Up to now the major benefit of being a Milk Recording customer for Edmund has been reducing SCC. He uses the Milk Recording report for culling decisions, mainly because it allows him to identify chronically infected cows. Breeding and Milk Recording are very much intertwined in Edmunds opinion.

The level of milk solids has improved on Edmund’s farm since he started using Milk Recording and Herd Health services. This year Edmund’s milk production is very impressive at nearly 500 kilos of milk solids. However, being determined to always improve his efficiency, he has a desire to increase that figure each and every year.

Edmund views the Herd Health report as a valuable monitoring tool. Currently on his farm there are certain diseases that the herd is clear for, such as Neospora and Lepto. The regular monitoring throughout the year allows Edmund to keep an eye on these diseases ensuring that they are not becoming a problem. Other diseases that are being vaccinated for are also monitored. ‘It is very reassuring to know that your vaccination program is working, and that progress is being made”. This is especially true for IBR in vaccinated herds, where the wild antibodies are tested for and the herd level should be dropping year on year if the vaccination program is working correctly.

Edmund undoubtedly sees the financial benefits of Milk recording and Herd Health. He identifies both as key drivers for his farm going forward. “Any farmer who isn’t Milk recording or using herd health, I would definitely recommend them to join. I think the information it gives you, and the amount of work that you can do with that information, is huge. If you want to drive on your herd, increase your solids, get a better cow, these services are essential.” 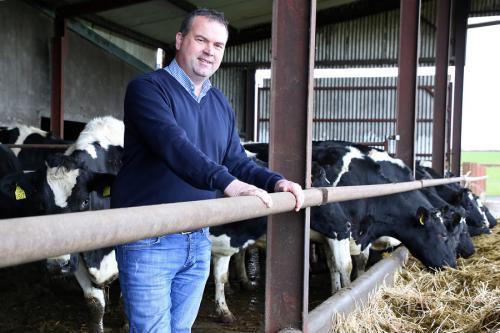 This year Kevin, Edmund’s eldest son is off on his travels to New Zealand. Edmund was keen on getting the breeding plan finished early before he went. He sat down with Joe Tobin and they picked out the best of the cows. Together they streamlined his herd into the top 60% that are suitable to breed replacements off. Edmund is currently breeding about 80% of the heifers to replacements. He has utilised A.I for almost twenty years and has always used proven top bulls. He trusts his cousin and breeding advisor Joe Tobin when selecting these bulls. Edmund jokes “he has to earn his crust too.”

Edmund understands the challenges of climate change. He believes it’s more important than ever to breed the better cow, as farmers might have to reduce their stocking rate. Edmund hopes to have the better cow that can maintain the same output with a lower stocking rate in the future. Improving milk solids is Edmunds main focus now, as he strives to improve the efficiency of his farm going forward.

How to Get Started